“Motezuma”, which first premiered in Venice in 1733, was loosely inspired by the historic 1519 encounters between Hernan Cortes, a Spanish conquistador, and Aztec ruler Montezuma.

The score to this fantastical opera was long considered lost until the year 2002, when a partial copy was discovered in the archives of the Sing-Akademie in Berlin. Since then, “Motezuma” has been reimagined and reconstructed by musicians and artists worldwide. 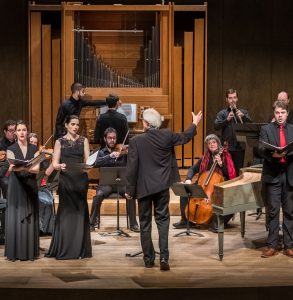 On February 14, Vivaldi’s treasured work will be brought to life in a new version completed and reconstructed by Mattias Maute, Artistic Director of the Bach Society of Minnesota. In his semi-staged production, the Aztec point of view receives an entirely new focus with a speaking role for Emperor Motezuma, played by actor Pedro Juan Fonseca.

Presented at the FIU Wertheim Performing Arts Center, “Motezuma” is a celebration of cultural and national collaboration. The prestigious Ensemble Caprice, a leading baroque orchestra from Montreal, will perform alongside an international cast of singers from Mexico, Spain, Canada and the United States.

All ages welcome! Tickets start at $30. To book, scroll below to “Tickets” section and follow prompts.

“Motezuma” is a celebration of cultural and national diversity. For this special presentation of the legendary opera, the Bach Society of Minnesota and Ensemble Caprice will be joined by a cast of international talent, and a chorus of young students from varying middle and high schools across South Florida.

Co-sponsors:  Bach Society of Minnesota and FIU School of Music