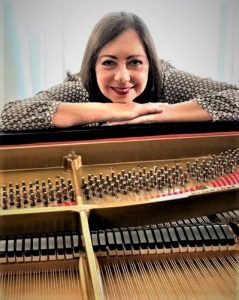 Dr. Katherine Driscoll has shared her love of music with thousands of students across several states and at Miami-Dade Public Schools and Miami-Dade College.

In 2019, she joined RK Cultural Productions as Artist in Residence and Outreach Chair, bringing their popular Bach to School programs to students across Miami.

A concert pianist, Katherine began her studies at age six, and at age eleven, studied at Dartmouth College with Lydia Hoffmann Behrendt, a student of Ernst von Dohnanyi.  She holds masters and doctoral degrees in piano from the Indiana University School of Music, where her teachers included Balint Vazsonyi (Dohnanyi’s last student) and Alfonso Montecino. 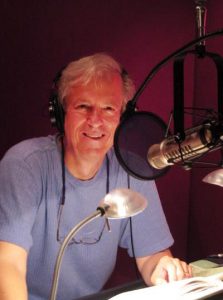 From the Lyric Pieces Edvard Grieg

It was long thought that Mozart composed this sonata in Paris around 1778, but recent studies show it was written in Linz around 1783 to -84.  Mozart often referred to “il filo,” or “the thread”, a compositional device to create unity in multi-movement works.  In this graceful sonata, the thread is a simple two-note motif, often referred to as a “sigh” figure and present throughout all three movements, with repeated intensity in the final one.

Robert Schumann founded the first magazine for music in 1834, and in 1838, merged literature and music into an extended fantasy he titled Kreisleriana.  The name derives from the main character in several novels by E.T.A. Hoffman, an eccentric and mercurial kapellmeister named Johannes Kreisler.  The work’s eight movements shift from fiery tumult to deep introspection, reflective of both Kreisler’s character and Schumann’s own persona.  He considered it among his best piano works, and wrote to Clara Wieck, who was not yet his wife, that she had figured prominently in its composition.

“I’m overflowing with music and beautiful melodies now – imagine, since my last letter I’ve finished another whole notebook of new pieces.  I intend to call it Kreisleriana.  You and one of your ideas play the main role in it, and I want to dedicate it to you – yes, to you and nobody else – and then you will smile so sweetly when you discover yourself in it.”

Unfortunately for Clara, Schumann ultimately chose to dedicate the work to Fryderyk Chopin, possibly to reciprocate for Chopin’s dedication of his second Ballade to Schumann.

from the Lyric Pieces

Edvard Grieg’s music is among the most recognizable of the Romantic Period’s nationalist composers. Celebrated and beloved in his native land, the Norwegian government bestowed on him a lifelong stipend in 1874.  In 1885, he built a home at Troldhaugen, near Bergen; today, it houses the Edvard Grieg Museum.  His ten collections of Lyric Pieces for piano meld spirited rhythms and folk-like melodies with exquisite harmonies and tender voicing.  Some, like the March of the Trolls, pay tribute to characters in Nordic legends.  Wedding Day at Troldhaugen was dedicated to his wife on the occasion of their twentieth wedding anniversary.

Perhaps no composer is more enigmatic or omnipresent in piano recitals than Fryderyk Chopin.  As Alan Walker wrote in his monumental biography, Fryderyk Chopin: A Life and Times, “The sun never sets on Chopin’s music…Chopin has come to symbolize a nation.  He is Poland’s best-known son.  Is there any other composer of whom similar things could reasonably be said?”

Tonight’s program includes two earlier works, the Op. 18 Waltz in E-flat, written in 1831, and the first Ballade, composed in 1835.  Some have speculated that this long, narrative piece was inspired by poems of the Polish poet, Adam Mickiewicz, who was a friend of Chopin.  However, no direct links to any works by Mickiewicz have ever been proven, and Chopin himself abhorred programmatic titles and extra-musical associations, so it is unlikely that the ballade tells a specific narrative.  The next to last Nocturne in B Major is among Chopin’s very late works and reflects a deeply personal, poignant  intimacy.  The program closes with the first Waltz in E-flat major, a piece that our artist first heard as an infant, and one that  inspired her to take up the piano.

Rise Kern Cultural Productions is committed to continuing to employ and properly compensate performing artists during this difficult period.
RK is able to offer this event free of charge due to the generous contributions of dedicated music lovers like yourself and with the support of the Miami Dade County Department of Cultural Affairs and the Cultural Affairs Council, the Miami Dade County Mayor and Board of County Commissioners. We thank FIU School of Music for co-sponsoring this concert.
Your support and donations are greatly appreciated. Thank you.
+ Google Calendar+ Add to iCalendar
Share this event