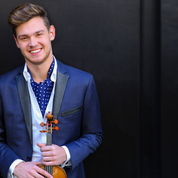 Violinist Blake Pouliot has joined the upper echelons of brilliant soloists, establishing himself as a consummate 21st century artist with the rigor and passion to shine for a lifetime. At only 25-years-old the tenacious violinist has been praised by the Toronto Star as, “one of those special talents that comes along once in a lifetime.”

He graduated from the Colburn School Conservatory of Music, where he studied with Robert Lipsett, the Jascha Heifetz Distinguished Violin Chair. Pouliot performs on the 1729 Guarneri del Gesù, on generous loan from the Canada Council for the Arts Musical Instrument Bank as First Laureate of both their 2018 and 2015 Competition. 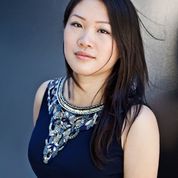 Quickly becoming recognized as today’s most sought after collaborative pianist, Hsin-I has been praised on concert stages in Germany, Russia, Japan, Korea and Taiwan. In the US, Hsin-I has played in esteemed venues such as Disney Hall and Zipper Hall.  She has collaborated with many artists such as Margaret Batjer, Andrew Shulman, Sheryl Staples, Chee-Yun Kim, Simone Porter, William Hagen, Blake Pouliot, Jacob Braun, LA Philharmonic principal horn Andrew Bain, associate principal violist Dale Hikawa Silverman and cellist Tao Ni. Passionate about constantly growing as an artist and helping others grow, she regularly collaborates with students in master classes of Robert Lipsett at the Colburn School of Music.

Hsin-I is also an accomplished cellist, winning many National competitions in Taiwan before completely focusing on collaborative piano.

The program will be:

“Review: Violinist Blake Pouliot wows audience with ASO debut playing Sibelius…Staggeringly sophisticated in his interpretation of French music, Pouliot showed in his Atlanta debut that the demands of the Sibelius Violin Concerto are well within his wheelhouse too. It’s always fun to see just how a violinist will choose to begin this concerto. Pouliot played the opening of the first movement mezzo piano and without vibrato — a gauzy, barely audible thread of sound. His playing throughout was immaculate, at once refined and impassioned and characterized by the full use of his bow. Unreserved, he played the violin lovingly and with technical precision. Pouliot is also visually expressive in a distinctive way. When not playing it’s apparent that he’s listening, looking at the orchestra and responding almost as if he’s hearing their part for the first time.”   – Arts ATL

“Soloist Blake Pouliot brings MSO audience to its feet with gorgeous Mendelssohn violin concerto…Rarely do I see a soloist enjoying themselves as much as Pouliot, even when he was tacit. He is an animated player, his body arcing with the contour of the melody and his smile shining out at the audience. Though he performed the quick darting passages of the demanding concerto well, Pouliot seemed most at home with slower, lyrical themes. He also displayed a gorgeous high register, ringing notes that resonated beautifully in Overture Hall…The highlight of the evening may have been the second movement of the concerto. Stylistically, this movement resembles Mendelssohn’s well-known “Songs Without Words.” Pouliot tastefully rendered the songful tune and kept the audience hanging on every last note — pure gorgeousness. In the third movement, the soloist showed his more playful side, particularly in a momentary back and forth between him and the orchestra. In this quicker movement, Pouliot danced between high and low registers, displaying expert dexterity and embodying the melody’s shape all the way from his fingers to his toes. While standing ovations are not irregular at Overture Hall, it is rare to see Madison audiences leap to their feet as quickly as they did for Pouliot. The consummate performer reciprocated, calling Wisconsin one of the “most hospitable places in the U.S.” He went on to perform an encore: his own arrangement of the Celtic song “Last Rose of the Summer.” Though an unassuming tune, Pouliot’s rendition rang with emotive power. He impressively maneuvered delicate and complex passages that combined pizzicato and legato articulations and found a rich and sweet heartfelt tone.”  -The Capital Times

“The Milwaukee Symphony managed to take a stroll through the British Isles Friday evening without ever leaving Uihlein Hall. Playing under the baton of London-born conductor Alexander Shelley, and joined by Canadian violinist Blake Pouliot, the orchestra delivered a wonderfully evocative program of music written in and/or about the British Isles. Pouliot joined the orchestra for a consuming rendition of Bruch’s “Scottish Fantasy” for violin and orchestra. He played with a completely captivating mix of musical fervor, some blindingly fast technical passages, simply stated traditional folk tunes, and a completely disarming grin that popped up in the middle of musical pyrotechnics.”  – The Milwaukee Journal Sentinel

“In the hands of Prutsman and young Canadian violinist Blake Pouliot, Ravel’s “Blues” flowed with the freedom of a popular jazz standard. Pouliot’s silvery tone carried weight even in the softest passages of the music, as he floated his melodies with the grace of a blues singer. Prutsman was a more delicate presence at the keyboard, though the duo brought surging intensity to the movement’s closing measures. Though not inspired by jazz per se, the rest of Ravel’s sonata took on a similar zest. In the first movement, Pouliot sculpted each phrase precisely to bring out the colors of Prutsman’s supple harmonies. In the finale, the duo tore through the driving figures with apt gypsy fire to bring the work to a rousing conclusion.” – Boston Classical Review

We would like to thank our co-sponsor FIU School of Music for their continued support in presenting BLAKE POULIOT.