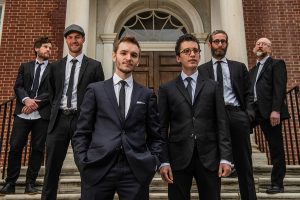 Ruckus’ core is a continuo group, the baroque equivalent of a jazz rhythm section: guitars, keyboards, cello, bassoon and bass. Other members include soloists of the violin, ﬂute and oboe. The ensemble aims to fuse the early-music movement’s questing, creative spirit with the grit, groove and jangle of American roots music, creating a unique sound of “rough-edged intensity” (New Yorker). Its members are assembled from among the most creative and virtuosic performers in North American early music, and is based in New York City.

Ruckus’ debut album, Fly the Coop, a collaboration with ﬂutist Emi Ferguson, was Billboard’s #2 Classical album upon its release. Live performances of Fly the Coop in Cambridge, MA was described as “a ﬁzzing, daring display of personality and imagination” (New York Times).

“Ruckus brought continuo playing to not simply a new level, but a revelatory new dimen-sion of dynamism altogether… an eruption of pure, pulsing hoedown joy … Wit, panache, and the jubilant, virtuosic verve of a bebop-Baroque jam session electriﬁed and illuminated previously candle-lit ediﬁces as Ruckus and friends raised the roof, and my mind’s eye will never see those structures in quite the same light again.” (Boston Musical Intelligencer)

With Holy Manna, a program including arrangements of early American hymns from the shape-note tradition, Ruckus has begun a multi-project exploration of histories of American music. Other upcoming projects include a co-commission of a large-scale work by pioneer-ing artist and NEA Jazz Master Roscoe Mitchell as part of a Bach / Bird Festival (with The Metropolis Ensemble and the Immanuel Wilkins Quartet).

Emi Ferguson can be heard live in concerts and festivals with groups including the Handel and Haydn Society,AMOC*,the New York New Music Ensemble, and the Manhattan Chamber Players. Emi’s recordings for Arezzo Music, Fly the Coop: Bach Sonatas and Preludes with Ruckus (2019) and Amour Cruel (2017) were amongst the top 10 albums on the Classica land World Music Billboard Charts and showcase Emi’s fascination with rein vigorating music and instruments of the past for the present. Emi has spoken and performed at several TEDX events and has been featured on media outlets including the Discovery Channel, Amazon Prime ,and Vox talking about how music relates to our world today.

Born in Japan and raised in London and Boston, she now resides in New York City.

A collaboration with flutist Emi Ferguson, Fly the Coop is a joyous, kaleidoscopic romp through some of Bach’s most playful and transcendent works. The program features new arrangements of Bach’s Flute Sonatas and Keyboard Preludes, orchestrated for baroque flute and the forces of Ruckus that include theorbos, baroque guitars, baroque bassoon, cello, viola da gamba, harpsichord, organ, bass, and the occasional banjo.

Ruckus explodes Bach’s bass lines into a rainbow of textures and colors, continually shifting like light over the landscape as Ferguson’s flute lines dance above. Contrasting the three flute sonatas are new arrangements of a variety of Bach’s keyboard preludes, with selections ranging from the beloved Well Tempered Clavier, to alternate movements from keyboard suites that are rarely performed.

Hailed by critics for her “tonal bloom” and “hauntingly beautiful performances,” English- American performer and composer Emi Ferguson’s unique approach to the flute can be heard in performances that alternate between the silver flute, historical flutes, and auxiliary flutes, playing repertory that stretches from the Renaissance to today.

Emi can be heard live in concerts and festivals around the world as a soloist and with groups including AMOC*, the New York New Music Ensemble, the Handel and Haydn Society, and the Manhattan Chamber Players. She has spoken and performed at several TEDX events and has been featured on media outlets including The Discovery Channel, Vox’s “Explained” series on Netflix, Amazon’s The Marvelous Mrs. Maisel, and Juilliard Digital’s TouchPress apps talking about how music relates to our world today. Her debut album, Amour Cruel, an indie-pop song cycle inspired by the music of the 17th century French court was released by Arezzo Music in September 2017, spending 4 weeks on the Classical, Classical Crossover, and World Music Billboard Charts. Her 2019 album with continuo band RUCKUS, Fly the Coop: Bach Sonatas and Preludes, debuted at #1 on the iTunes classical charts and #2 on the Billboard classical charts, and was called “blindingly impressive…a fizzing, daring display of personality and

imagination” by The New York Times. In addition to her solo recordings, Emi has also been featured on recordings for New Focus Records, Old Focus Records, Canteloupe Music, National Sawdust Tracks, Brontosaurus Records, Coro, and MSR Classics. Emi was a featured performer alongside Yo-Yo Ma, Paul Simon, and James Taylor at the 10th Anniversary Memorial Ceremony of 9/11 at Ground Zero, where her performance of Amazing Grace was televised worldwide. Her performance that day is now part of the permanent collection at the 911 Museum.

Emi is passionate about developing new music and has premiered works by many of today’s leading composers. Emi has been a featured performer at the Marlboro Music, Lake Champlain, and Lucerne Festivals, Portland Bach Festival, Bach Virtuosi Festival, June in Buffalo, Twickenham Fest, and Chamberfest Dubuque, and has performed and taught with Juilliard Global in Brazil, pianoSonoma in California, Juilliard Baroque in Germany, and Les Arts Florissants in France and has been featured as a soloist and ambassador for Elliott Carter’s music in China and Japan.

As a historical Flutist, in addition to her appointment as Principal Flute of the Handel and Haydn Society, Emi is thrilled to be a frequent guest artist with period ensembles including Tafelmusik, Voices of Music, the American Classical Orchestra, and Trinity Baroque Orchestra. She was the only flutist accepted to Juilliard’s inaugural Historical Performance class, and has performed alongside William Christie and Les Arts Florrisants, and with Christophe Hammer, Massaki Suzuki, Christopher Hogwood, and Nicholas McGegan.

Emi is currently on the faculty of the Juilliard School, the Bach Virtuosi Festival, and has taught on the faculty of the University of Buffalo. Emi was the first person to have graduated from Juilliard with Undergraduate and Graduate degrees with Scholastic Distinction in flute performance, as well as a second Graduate degree in Historical Performance as a Paul and Daisy Soros Fellow.

Her principal teachers have been Carol Wincenc, Sandra Miller, Robert Langevin, and Judy Grant. Born in Japan and raised in London and Boston, she now resides in New York City.

Prize winner at the 2019 Houston Symphony’s Ima Hogg Competition. Founding member AMOC* (American Modern Opera Company) and with this ensemble has begun pushing into the areas of dancing and acting. Degrees from Rice

Member of Ruckus, The Chivalrous Crickets, and the Baroque Chamber Orchestra of Colorado. Recent Recordings: “Orphea” by Majel Connery, Emi Ferguson’s “Amour Cruel”, and “Arcangelo’s Circle”, by the Baroque Chamber Orchestra of Colorado. Paul is an active performer and recording artist of music ranging from historical resurrections to his own creations.

Bassist, composer, and poet based in New York City. The New York Times has described his compositions as “vivid, emotive, with contemporary twists”. Popular new music blog I Care if You Listen has critiqued Mr. Balliett’s work as “weird in the best possible way” (A Gnostic Passion) and “light-hearted yet dark…it had the audience laughing one minute and in tears the next…” (Pyramus and Thisbe). Member, ACRONYM, Ruckus, Oracle Hysterical, AMOC. He teaches double bass and violone at the Juilliard School, as well as classes in Historical Performance and The Beatles.

As an accompanist and continuo player, Cockerham has performed with numerous ensembles in New York and San Francisco. Beyond chamber music, Cockerham concentrates on 17th-century Italian opera and has been involved in numerous modern world premiere performances with companies such as Innsbrucker Festwochen der Alten Musik and Ars Minerva. Cockerham is a doctoral candidate at the Juilliard School.

Farnace, and Cavalli’s Veremonda, both with Spoleto Festival USA; and assistant conductor and harpsichordist for Dido and Aeneas with L.A. Opera. BM, MM, composition, University of North Texas. Graduate Diploma, The Juilliard School.

We would like to thank our co-sponsor FIU | Wertheim School of Music and Performing Arts for their continued support in presenting RUCKUS.

RK is able to present its 2022-2023 “Bach to Live Concert” series because of the generous contributions of dedicated music lovers like yourself and with the support of the following sponsors.